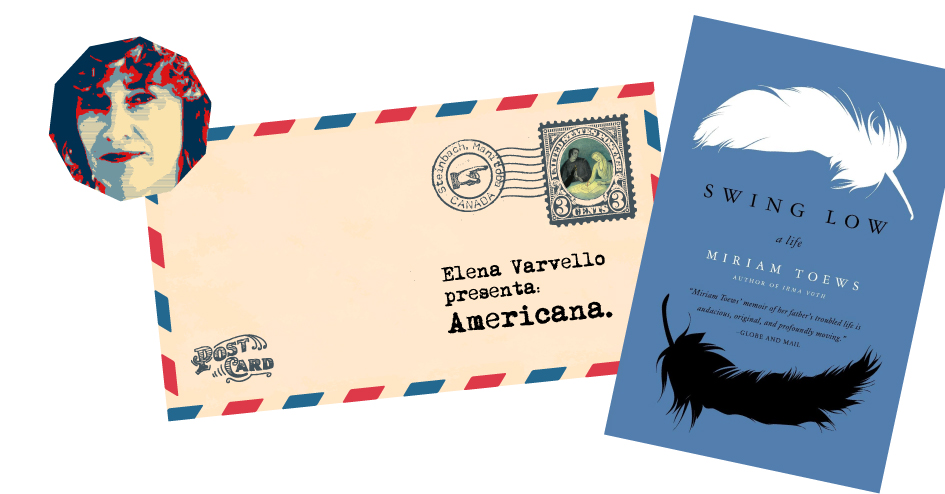 These days I have often wondered if I would have done well to cross the border, perhaps starting from Montana (where Dell Parsons, the young protagonist of one of Richard Ford’s most beautiful novels, begins his journey north), or perhaps from Minnesota or from the state of Washington. Cross the border and enter Canada, leaving the United States behind for a while.

I mulled it over. I had Truman Capote in mind: I imagined him sitting with Nelle Harper Lee in her apartment on the Upper East Side, New York, after the Clutter massacre – November ’54. I imagined him showing her the paragraph torn from a page in the New York Times, just a few lines with the news of that horrendous crime, on the plains of Kansas. I imagined him asking if she would like to accompany him to Holcomb. I wanted to write about him, Truman Capote. Then I decided to travel to Canada, with no looking back. I said to myself: it’s still North America, in any case. I told myself that I had to do it, since there was a book I needed to talk to you about. A very important book for me, a book entitled Swing Low, whose author is called Miriam Toews.

Canada, the land of those gems that are the short-stories of Alice Munro (from Wingham, Huron County, Ontario), and the land of Margaret Atwood (from Ottawa, the capital). Canada, the land of Miriam Toews – pronounced as saves: take note – born in the city of Steinbach, south-east of Winnipeg, Manitoba, a region once inhabited by the Ojibwe people. Steinbach, founded in 1874 by groups of Russian families, Mennonite families, belonging to the largest of the Anabaptist churches, whose first language was – and in part still is – Low German. Steinbach, a dot in the prairies of Canada once traversed by the Ojibwe, a place that the world got to know in 2004, reading A Complicated Kindness, one of Toews’ masterpieces – in those pages Steinbach took the name East Village and it was, to the eyes of the protagonist, the rebel and nonconformist Nomi, made up of great silences and farms, slaughterhouses and butchered chickens, rules, prohibitions and traditions.

Rules, prohibitions and traditions: the Mennonites, pure among the Puritans. No frivolity, only that which is essential, and the word of God. The keen perception of evil and guilt, which shame, control and hypocrisy are very often linked to. Of all the sins, one is very dangerous, and called irreverence (shputting in Low German). The Mennonites, stuck on the threshold between the world – with its confusion, its disorder and its ambiguity – and the absolute intransigence of the Word of God. Stuck between life and purity, between chaos and perfection, hell and heaven. Trapped, in some cases. Because it can become a kind of trap, this being in the world yet having to keep out of it.

The Ordinary Mennonite Church used to shun and cast out members that bought soft-top cars, owned radios, danced, smoked, drank, doubted, or had red telephones installed in their homes or avocado-coloured fridges.

Miriam’s great-grandfather was among those who saw the birth of Steinbach (“Shitville, we called it,” she said, guilty of shputting, speaking of when she was a girl), those Mennonite exiles to whom Queen Victoria had arranged arable land to be assigned, with no payment required. And so there he was, the exiled Toews, in the very new, barely sketched out Steinbach – just a village then – a dot on the Canadian plains so far from Russia. Then here comes Henry, Miriam’s grandfather, who raised chickens and hens and who sold eggs, and then her father, Melvin, still there in Steinbach, where she, too, was born in 1964.

It is this man, called Mel, an elementary school teacher, married to Elvira and father of two daughters, that we are talking about. He is the voice of Swing Low – a voice as precious as gold – it is he who tells us:

I lay back and began to cry, finally, and I thought, It’s over now, it’s pouring out of me, my shell has cracked and I will never have another chance. That was the last thing I remember of myself as an egg. The next morning or four days later, nobody told me how long it had been, I woke up here in this hospital and was diagnosed as suffering from manic depression. Hmm, I said when the doctor told me. Are you hungry? he asked. Hmm, I replied again. I was busy thinking.

To be between this world and the world above, between hell and heaven. Maintaining your balance but then breaking in two. Standing with your feet on the ground, amongst refrigerators and telephones, children and tubs of ice cream, classrooms and potato fields, with your eyes perpetually turned to the sky, turned towards purity, and then, at a certain point, feel your own shell cracking.

Is it a self-destructive urge, I wonder, to want to walk away from everything you know and love, or not? Is depression in part a result of not feeling at home in this world, and blaming yourself for it?

It happens so often, to so many of us.

Faith may or may not be a factor. In any case, it is always about life, the way it unfolds. There is the mystery of who we are, and the age-old conflict that we carry within us between light and darkness.

It is the voice of Mel – a shell that cracks – this life-novel that is Swing Low, a novel to be consumed in one sitting, sometimes sad and sometimes funny, comical and very serious. And above all it is authentic, true to its core, of such truth that belongs only to stories.

It is the story of a man, a good father and a good husband, a good Mennonite and an excellent teacher, but a man who is broken in two. The story of his resistance, of his coming apart, of his attempt to piece himself back together, of his succeeding and at the same time not succeeding. And it is his daughter Miriam who restores his voice, thoughts and memories through the power of a novel. She is the one who brings him back, puts him back into the world, back in Steinbach, on the Canadian plains, so that Mel can tell us what it was like to be him. So that he can tell us his story.

It’s just something that happens sometimes, a story as old as time, and this time it happened to me.

Now there is something I have to tell you, one of the reasons – there are so many – why this novel is so essential to me. There is another father about whom you are about to read, but his name is not Mel.

During a psychiatric hospital admission, in 2009 – a very necessary one – my father somehow managed to convince the doctor on duty that he did not have any problem, that he was fine, that all of us, his family, were exaggerating. It was a complete mistake that he was there. My father was talented in the art of deception, and so able was he that he was discharged. The doctor even gave him the money to pay for a taxi home.

So, in the middle of the night, my father – furious and convinced that we were all part of a conspiracy – sped through the sleeping streets in a taxi and up through the woods, getting out at our house to ring the doorbell continuously, hauling us out of our sleep.

I loved my father, but at that moment I didn’t want to let him in. We were afraid of him. But we had to give in.

On that terrible night, my mother slept in another room. She locked herself inside. He stayed awake the whole night, imagining who knows what, brooding over who knows what.

More or less a month later, he was a complete failure again – these are his own words. He was depressed, he was inconsolable. He wept all the time. I don’t think he recalled anything about that terrible night.

This was my father’s life, especially in his later years. Always lurching between two extremes, suspended between two worlds, plunging towards one side and then the other. On good days, however, he was that father I think back to now: very funny, quick-witted and intelligent. An irresistible man full of ingenuity. We loved him, and he loved us.

He called me bush, because of my full head of hair.

He had beautiful blue eyes.

He wore suspenders and checked shirts.

He was a chain-smoker.

Life can become a shell that cracks. If we try, we can put it back together again, at least for a while. It is a seesaw.

Life sometimes is Mel, son of a Mennonite who sold eggs, grandson of a Russian Mennonite, who settled on the Canadian plains, father of a writer wonderfully guilty of shputting, whose surname rhymes with saves, like stories save us. Mel, with his bipolar disorder, who simply tried to stay upright. Mel, writing from his hospital bed:

It will feel so good to get some fresh air. It really will be good, as is Swing Low. The same air you breathe there – the thought comes to my mind – while you return to the United States, heading for New York, and you turn for a moment to take a look at the city of Steinbach, where Mel Toews, with all his darkness, fragile as an egg, kind-hearted and depressed, beloved by his pupils, beloved by his wife and daughters, had been an elementary teacher.