“The Tale of Genji” by Murasaki Shikibu 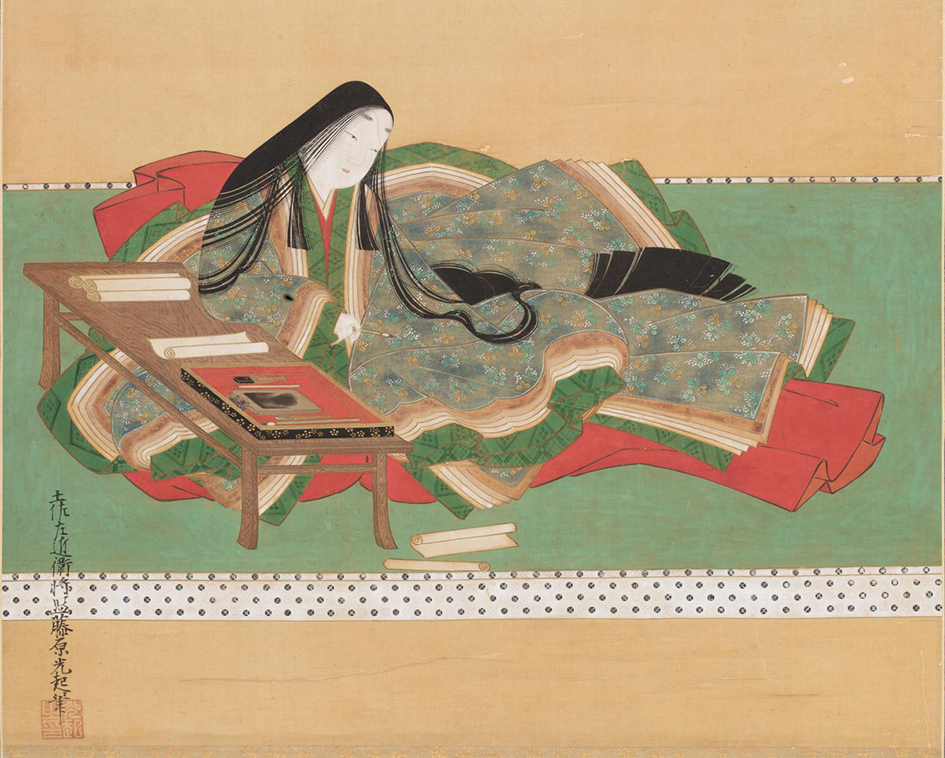 “Real things in the darkness seem no realer than dreams.”

The first time I came across the Japanese novel The Tale of Genji, I was immediately struck by the fascinating details that surround the book and its author, and I immediately felt curious to step into what seemed like an intricate and mysterious depiction of life at the Heian Court, a mix of romance, beautiful poetry, religious beliefs and political intrigue. Even though reading its 54 chapters and over 1000-page translation may initially seem a daunting task, you will soon realise that it is worth the effort, because you embark on a journey to a different world that will capture, surprise and entertain you.

Written by Murasaki Shikibu at the beginning of the 11th century, the book is widely seen as one of the first novels ever written, and certainly the very first phycological one. The original manuscript does not exist anymore and, as it is common for considerably old books, the order of the chapters and the text we read today is likely to be the result of it being repeatedly copied over the centuries. This might have somewhat affected the original wording and style of the Tale; in particular, some scholars have identified discrepancies between chapters 45 and 54 that may suggest that Shikibu was not its sole author and someone may have completed the book after her death. However, there is not enough evidence to firmly support this hypothesis, and since it may never be possible to shed light on this, we should not let it prevent us from enjoying this beautifully written masterpiece.

A hero’s journey through the eyes of a woman

As the title suggests, the Tale mainly follows the life of Genji, also known as the Shining Prince, who is the son of the emperor and his favourite concubine. Initially, his future looks bright, but he quickly loses his status and position at court when his mother suddenly dies. Expertly guided by the author, we follow the ups and downs of Genji’s multiple love affairs, the mixed fortunes of his political career and his adventures away from the court when, due to a scandal, he had to leave the capital.

The story is presented to us through the eyes of Murasaki Shikibu, the Tale’s female author, her perceptions and observations of a man’s behaviours and feelings from the perspective of an incredibly insightful woman. Through her exceptional word craft, she shares a wealth of details on the story’s hero and the society of the time, but we still know very little about her. Her identity and life can probably be considered the biggest mystery surrounding the novel. Even though different hypotheses have been put forward, we are not even sure about her real name; we know her by the descriptive name of Murasaki Shikibu that she shares with one of the main characters in the novel and Genji’s greatest love.

Born in the mid-level aristocracy of the time, she was a lady-in-waiting at the Japanese imperial court and therefore ideally placed to describe what happened within the palace walls and the lives of those who lived there, from the way they dressed and spent their time to the moral principles and religious beliefs that guided their actions. We also know that she married late to a man much older than her, and she most likely wrote her book after he died. A fascinating piece of biographical information is that Murasaki Shikibu had a deep knowledge of Chinese classics and showcased it in her Tale, unlike most of her female contemporaries. At a time when women not only were discouraged from learning poetry, calligraphy or Chinese classics but were also considered unladylike when displaying too much knowledge, Murasaki’s father decided to educate his daughter himself and, probably unconsciously, triggered in her the love for literature and ultimately the desire to create the timeless novel that we can all get to enjoy today.

A new language and a new style

Probably reflecting its author’s distinctive education and life experience, the novel presents interesting peculiarities from both a stylistic and linguistic point of view. The Tale was written in vernacular Japanese, mainly created and used by women to write their diaries and journals. This was since, at the time, Chinese was the court’s formal language – in the same way, Latin was in Europe – and studying it was a privilege that only men had. Similarly, poetry was considered the highest form of art, and prose was merely seen as secondary. As a result, anything written in prose, especially Japanese vernacular was quickly discarded as unworthy of attention.

That was the case until The Tale of Genji came along. Shikibu’s beautifully crafted prose combined narration, characters’ interior monologues, detailed descriptions, dialogues, poems (the tale has over 790 in total) and the narrator’s voice and was enriched by the author’s knowledge of both Chinese and Japanese classics. In addition, Shikibu showed an incredible ability to combine all these literary forms in a harmonious ensemble and used them to vividly portray the specific context, the characters’ personalities, and their moods. This is rightly considered the first psychological novel because, thanks to the author’s unparallel understanding of human emotions and our relationship with nature and religion, the thoughts and feelings of the characters often take centre stage, relegating the plot development to the background.

The Tale will also take readers – especially Western ones – by surprise because not only will many characters disappear from the story, but even Genji, the absolute hero of the story and Murasaki, the love of his life, die halfway through the book. In contrast with the widely-accepted Western expectation that a novel like this should follow the hero’s fortunes throughout its length, the Tale shifts the focus on Genji’s son and grandson and their adventures, spreading the story across four different generations.

A masterclass in the art of the unsaid

Shikibu’s deep knowledge of literature and her familiarity with different forms of writing made her style complex in a positive, meaningful way. Her way of narrating the story is, at times, almost lyrical. Mainly when focusing on the characters’ thoughts and emotions, the narrative becomes less and less descriptive and leads us directly into the mind of a specific character, almost following a stream of consciousness or an interior monologue. We often lose sight of the plot because multiple different stories and relationships are presented simultaneously, and the narrator will only show us the connection between them later on in the story. To make things even more complicated, there are many layers to Shikibu’s characters; they are neither linear nor straightforward in the way they think or behave, and they realistically represent the contradictions and complexities that all human beings have.

As a considerable part of the narration also centres on the hero’s love conquests and his relationships with different women, the art of seduction and courtship also plays a significant role in the story. But, as it’d have happened in real life at the Heian court, nothing was said clearly or explicitly; many things are left unspoken or are just alluded to, and poetry is used as the primary tool to express one’s feelings and intentions. Courtly lovers barely saw each other during the courtship period because respectable women were always hidden behind curtains or screens. They communicated through in-betweeners who delivered poems written on beautiful, scented paper.  An excellent sense of style and the knowledge of verses were both an indication of good character and a highly desirable feature in a lover. But the author goes beyond the romantic idea of these affairs and shows us how sexual relationships were often linked to political power and advancement and were, in many cases, deliberate and strategic decisions rather than love choices.

The Tale of Genji as a cultural phenomenon

The Tale’s realistic portrait of a society and its exploration of universal emotions like love, ambition, pride, revenge, fear, and disillusion that are shared by all human beings across the centuries make it a timeless masterpiece. But it is more than that, and it is a global sensation. Over the years, the Tale’s popularity has spread across different art forms, life domains and social contexts, turning it into a true cultural phenomenon and an inspiration for countless objects, artistic traditions, events and lifestyles.

Unlike other literary masterpieces, the Tale was overwhelmingly popular in the Japanese society of its time, and the admiration for it only grew over time. It would be impossible to mention all the different examples here, but what makes the phenomenon genuinely unique is how broad its reach has been at other points in time. For instance, during the Edo period, prostitutes named themselves after one of Genji’s lovers. Scenes from the book were represented on hanging scrolls, lacquer boxes, screen paintings and even on traditional kimonos. They inspired Japanese design, architecture and people’s sense of aesthetics and beauty. Games and mangas were – and still are – dedicated to or inspired by Genji’s story, and a scene from it can be found on a Japanese banknote too. The list is endless.

The Tale’s influence has also spread outside Japan and has continued to spark the interest of Western audiences in modern times as well. When reviewing one of its translations in British Vogue in the 1920s, Virginia Woolf said that she could see a deep connection between her style and Shikibu’s novel and way of writing. Still today, the novel is used as inspiration in fashion, the theatre and many other art forms. For example, a few years back, the Met hosted an exhibition on the artistic tradition inspired by the Tale.

Be prepared to be an active reader!

Ultimately, the reason behind the Tale’s success is that it is at the same time a portrait of a society, an exploration of human emotions and relationships and an insightful window into life at the Heian court. It offers something for everyone and, when reading it, we are left with a sense of fascination, enchantment and curiosity and the feeling that we have achieved something significant by reading it. Far from being an easy read, the Tale will challenge you in many different ways, not only because of its length or the number of characters it features.

It demands a lot from its readers: undivided attention, the willingness to invest time and focus on the story, and patience in following the often slow and dense narrative. At times, it will feel like you are putting the pieces of the story together yourself, a little bit like you would when you do a puzzle or try to solve a problem.

Many consider an abrupt, undefined conclusion requires the reader to play an active role and perhaps intentionally leaves us the freedom to create our ending. Or it simply shows once again how Murasaki Shikibu excelled at the art of the unsaid: a non-ending could be a way to depict the

cyclical nature of human life and the continuous struggle between happiness and sadness, joy and pain, dream and reality.