The story of the stone 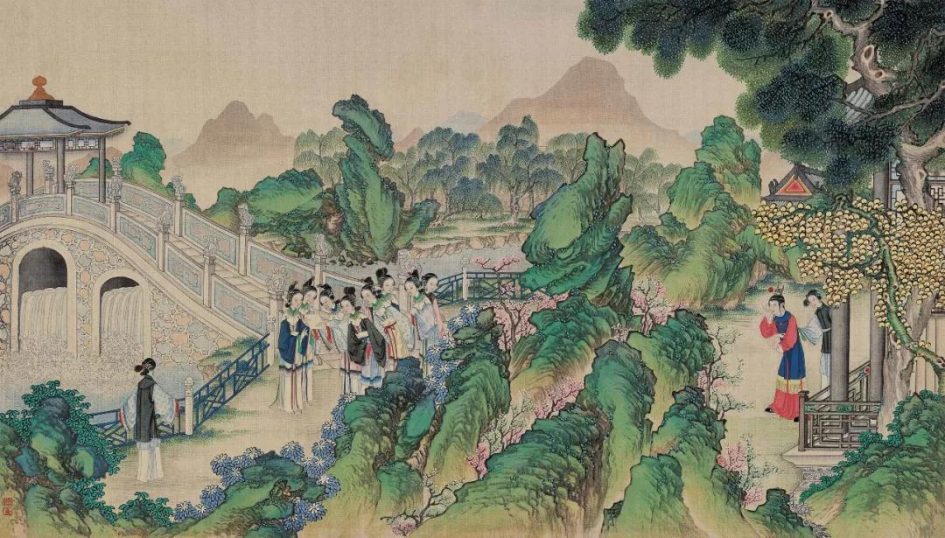 Also known as the Dream of the red chamber, the Story of the stone is considered one of the four classic novels in Chinese literature so much so that in China its two main characters are at least as popular as Romeo and Juliet in the Western world. The book tells the story of Bao-yu (which literally means precious jade), the heir of the prominent Jia family who was born with a magical jade of Spiritual Understanding in his mouth, symbolising the fact that he is the incarnation of a spare stone among those used by the goddess Nuwa to repair a piece of the sky. He is in love with a relative, Daiyu, who shares his interest in poetry and music and represents the incarnation of a Crimson Pearl Flower. In another world, the two were meant for each other and they were sent to the earthly world to learn from the human way of life and settle their karmic bond. Bao-yu’s family, however, have already decided that he will marry another cousin, Xue Baochai, who is portrayed as an idealisation of the perfect woman: she possesses beauty, grace and intelligence. The love-friendship-rivalry triangle between these characters is the backbone of the novel and is set in the context of Bao-yu’s family decline.

The version of the book that we read today consists of five volumes and 120 chapters, and a combination of the 80 original chapters written by Cao Xueqin and the additional 40 that is, at least partially, attributed to Gao E. However, there is a lot of uncertainty surrounding many aspects of the book and how it became a novel modern that readers can now enjoy. One of the most discussed elements has been its authorship, especially when it comes to the final chapters that were added in due course. In addition, Cao himself was confirmed as the main author only at the beginning of the last century and the minor inconsistencies that an attentive reader might spot across the volumes support the thesis that the book went through multiple rewrites and alterations, most likely by different people. The novel has been at the centre of so many debates and studies that it even has its own dedicated academic field, Redology, that aims at understanding and commenting on this masterpiece as well as explaining some of the mysteries that surround it. In particular, it’s possible to identify four distinct groups of experts: the commentators, the index group, the textual critics and the literary critics, depending on the specific perspective they took when analysing the novel and the period of time when they carried out their work.

So, what do we know for certain?

The studies on the subject indicate that the Story of the Stone was most likely written in the 1760s during the Qing dynasty but remained unpublished for a few decades after its author died. Before the first – and very expensive – printed edition became available in 1791, the Story circulated through manuscript copies with different titles and multiple annotations, most of which were attributed to a mysterious author known as Red Inkstone and ended with chapter 80. Since this anonymous commentator seemed to know quite a lot about Cao Xueqin and his work, many experts concluded that he was probably somehow related to him directly, even though there is no definite proof of it. The faith of the book was probably also affected by Qianlong’s literary inquisition, during which a lot of authors saw their work being burned because considered dangerous and inappropriate. With its references to the Chinese feudal society of the time and its critique against corruption, The Story of the Stone could have definitely represented a threat for the ruling class of the time and, as a result, became the target of a ban from being officially published. This however doesn’t mean that manuscript copies didn’t continue to circulate among the circles closer to the author.

The Story is most likely set in Peking and could be considered a partially autobiographical work because the rise and fall of Bau-yo’s family mirror the decline of Cao Xueqin’s. We don’t know much about the author’s early life but some of Cao’s family members most likely served the Qing dynasty emperors before falling in disgrace. By the end of his life, Cao himself was in a dire financial situation and he lived with the money that he made by selling occasional paintings. He was also known for wasting most of it on drinking, which means that he was certainly well placed to narrate the misfortunes of a family in decline and the fleeting nature of material possessions.

The narration develops on three levels: the reader follows Bao-yo’s earthly experience, the faith of the Jia family and, at the same time, the decadence of Chinese society. The book touches on different topics from romantic love to philosophical beliefs but one of its most defining elements is that it provides a detailed account of everyday life and an insightful description of multiple aspects ranging from Confucianism and poetry to eating habits and festivities, from proverbs and culture to rites and family life. All of these details are masterfully interwoven together and combined with the darker side of society: corruption, intrigues, financial ruin, moral decay and death.

Early on in the book, the reader understands that reality and illusion are often blended into each other and are used by Cao Xuequin to move between autobiography and fiction as well as to convey the idea that, on one side, the characters in his story are the product of his imagination and, on the other, they are real people who played an important role in his life. Cao also plays with the concepts of reality and illusion by choosing the two surnames of the main families in the book: Jia means imaginary and Zhen real, but for the author, they are two sides of a single story. This view reflects a Buddhist belief that sees reality as an illusion and life itself as a dream, from which we will, at some point, wake up. In other words, they are two parts of an overarching reality and humans move, often unconsciously, between the waking and the dreaming worlds.

When trying to describe it, some people like to compare the Story with Paradise Lost, others to In Search of Lost Time or War and peace and for many it’d be appropriate to say that it’s a combination of the three together. What they may all agree on is that, though extremely captivating and gripping, the novel is not always easily accessible by a Western reader. First of all, because it lacks the narrative frame and underlying thread that characterises similar masterpieces in our literature. In addition, there are about 50 main characters and at least 400 additional ones, many of which with names that are difficult to remember and can easily create confusion. As if this wasn’t enough, most of the readers probably lack a few of the cultural clues that may help with understanding certain passages and the symbolism behind them.

One of these symbols is, for example, the colour red. Unlike in a few Western cultures, it has a positive connotation in China. In the book, it is used on multiple occasions to indicate, among other things, spring, youth, good fortune and prosperity. One of the translations of the title also includes the word red in reference to a chamber. What not everybody might know is that, historically, a red chamber in China would be associated with the rooms in a house where the daughters of a prominent family lived. It is, therefore, no coincidence that, in chapter 5 of the novel, Bao-yo dreams about the faith of many of the characters in the Story while sleeping in a red chamber.

Why should we read the Story of the Stone?

Despite being a potentially challenging read for the average Western reader, the novel has been the inspiration for countless film adaptations, TV series, operas and other artistic endeavours, not only in China but worldwide. This is a testament to the fascination that this novel sparks among all readers, precisely because of the intricacy of the story and the mysterious nature of many aspects that characterise it. What makes it so special and worth reading then?

. A family saga and romantic love – this is definitely not a new combination but it is skillfully used in the Story. Once again true love is prevented from flourishing due to external interferences: family expectations, class disparities, social barriers and the wider society.

. The role of female characters and how they are portrayed – unlike other masterpieces of the past, the novel features many women with a central role in the development of the story. According to the information gathered, the author probably used his female characters to remember and pay homage to the women in his life. What makes it even more powerful is that Cao gives space not only to family members and friends but also to servants, providing in this way an insightful view of all social classes.

. A glimpse of the Chinese society of the time. The curious reader will find countless details on Chinese culture and traditions, a condensed encyclopaedia of many aspects that help not only to put the novel into context but also to understand the wider society better. The author also uses his work to condemn the feuding ruling class and the patriarchal system that governed life during that period of time.

. The continuous search for meaning and enlightenment. The novel also offers many direct and indirect references to Buddhist and Taoist beliefs and encourages the reader to reflect on the concept of happiness and self-realisation as well as on the ephemeral nature of worldly belonging and fortunes.

The list of reasons why you should read this book could go on indefinitely, but what is really important is that in the Story there is something for every reader and it can mean different things to different people.  It does not really matter whether we understand the deep meaning of every single paragraph or symbol, we should simply embrace the experience of reading this novel that will truly open the door to multiple new worlds and will offer a different perspective on some of the universal topics that have interested us all as human beings over the centuries.